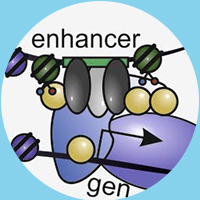 Our activities, and that of others, to unveil the genetic basis of human appearance traits via candidate gene and genome-wide association studies provide numerous DNA variants from various genes that demonstrate statistically significant trait associations. However, because of the use of microarrays for establishing genome-wide datasets of single nucleotide polymorphism (SNP), which in their design are biased towards SNPs outside genes, the functional relevance of the identified associated SNP typically is unclear. We are using up-to-date functional genetic and functional genomic methods and technologies to unveil the functional basis of appearance-associated SNPs, as next step in understanding the molecular basis of human appearance. For instance, we recently demonstrated that several pigmentation associated SNPs from different genes are functionally responsible for pigmentation variation because they are located in enhancer regions that depending on the SNP-allele interact with promotor regions of the same or nearby genes, and thus regulate pigmentation gene expression with consequent phenotypic differences in human pigmentation traits.