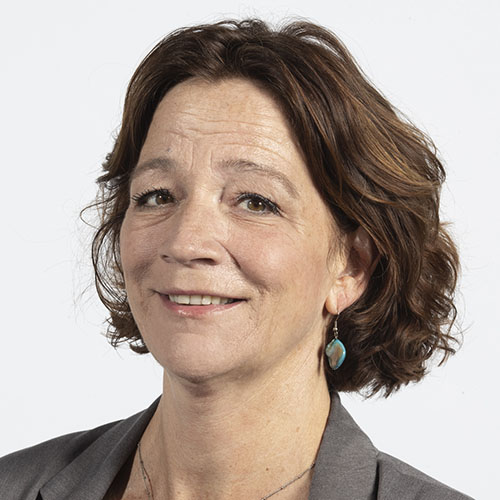 After her 3 year research training in the group of Prof. S. Ross, at the Pennsylvania School of Medicine in Philadelphia, Bernadette obtained her PhD at the dept. of Viroscience, ErasmusMC Introduction
on "the Discovery and Characterization of the Human Metapneumovirus (HMPV)". Since then, Bernadette has been investigating all aspects of the interaction between HMPV and the human immune system. She has contributed to the development of a reverse genetics system for HMPV, designed and evaluated several vaccine candidates, and identified Favipiravir (T-705) as a possible antiviral therapy for pneumo-and paramyxoviruses.

Achievements
Bernadette has shown that HMPV, just like HRSV, subverts the type I interferon pathway of the host innate immune system and she has shown that HMPV stocks generate defective interfering particles (DIs) quickly upon viral infection and these DIs strongly activate the type I interferon pathway. Using recombinant viruses for RSV, HMPV and chimera of these, the research group of Bernadette is aiming to identify the mechanism HMPV uses to subvert the host innate immune response.

During her research, van den Hoogen started to work with a broad range of Pneumo- and Paramyxoviruses, such as Newcastle Disease Virus (NDV) and the Measles virus and she became intrigued by the fact that these viruses not only induce severe disease but can also be used to our benefit. The Oncolytic Virus Research group of van den Hoogen has been investigating the use of viro-therapy with NDV for treatment pancreatic adenocarcinoma's. She has shown in vitro and in vivo that this virus has a high anti-tumour efficacy against pancreatic tumors without inducing side-effects. To increase the efficacy, she generated more virulent recombinant NDVs with higher efficacy in in vitro and in vivo models. However, high virulent NDV strains might pose a threat to poultry. To increase the safety, recombinant NDVs were generated that are attenuated for poultry but have equal oncolytic efficacy.

Bernadette has received her certificate for teaching from ErasmusMC and has been teaching at master's programmes, as well at the BSc programme, at ErasmusMC Rotterdam, on topics ranging from virus discovery, paramyxoviruses, innate immune responses to RNA viruses, and oncolytic viruses. In the last years she has (co-) supervised several PhD-students and BSc and MSc students. Since 2007, Bernadette is the responsible researcher for GMO permit 01-154 (research on Human Metapneumovirus) and - since 2010- GMO permit 11-024 (Research on Oncolytic viruses).

Dr. B. van den Hoogen is coordinator, with Prof. J. Hiscott from Institute Pasteur in Rome as co-coordinator, of the INITIATE ITN consortium. INITIATE (Innate-Immunometablism as Antiviral Target) is an Innovative Training Network funded by the European Commission with the goal to train a new generation of young researchers in the emerging field of antiviral immunometabolism.

In 2004, van den Hoogen received a prestigious VENI grant from NWO for her research on the interaction of HMPV and the innate immune system, for which she obtained training in the research group of Prof. A. Garcia-Sastre at Mount Sinai hospital, New York. Together with Prof. R. Fouchier and Prof. R. Hoeben (LUMC) she received a STW grant, to establish the safety of these oncolytic viruses for humans and poultry. In 2014, van den Hoogen was co-founder of the consortium on 'Oncolytic-Immuno-Viro- Therapy (OVIT), in which Dutch researchers on oncolytic viruses collaborate with the aim to bring oncolytic virotherapy to the clinic for treatment of patients with pancreatic, brain, bladder and prostate cancer. To this end, van den Hoogen’s research group also received funding from the foundation 'Overleven met alvleesklier kanker'.

What research group(s) or lab(s) do you participate in?

The overall aim of this research line is to understand the interaction of paramyxo- and pneumoviruses and the host in order to identify correlates of disease or protection, understand viral mechanisms of immune evasion, and use these insights to develop intervention strategies.