Our overarching goal is to decipher the molecular mechanisms that control immune cell phenotypes in both homeostasis and disease to identify targets for therapeutic intervention. We work towards this goal by employing state-of-the-art genomics technology to study gene regulatory mechanisms in mouse and human immune cells. Special emphasis is placed on the identification and characterization of gene regulatory elements and transcription factors critical for lymphocyte dysfunction in asthma, autoimmunity and cancer. Disease-relevant cell populations are obtained from mouse models that mimic human immune disorders and patient material from the clinic or collaborations with nearby hospitals.

Ralph Stadhouders obtained his MSc and PhD degrees at Erasmus University Rotterdam. During this period, he studied gene regulatory mechanisms in developing blood cells at the Department of Cell Biology under the guidance of Dr. Eric Soler and Prof. Frank Grosveld. He then obtained several postdoctoral fellowships to relocate to Barcelona (Spain) and join the laboratory of Prof. Thomas Graf at the Centre for Genomic Regulation (CRG). There he studied how transcription factors rewire the transcriptome and epigenome during the reprogramming of lymphocytes into pluripotent stem cells. In 2017 he returned to the Erasmus MC and initiated his own line of research in collaboration with the Department of Cell Biology (Prof. Danny Huylebroeck & Prof. Frank Grosveld). Operating at the interface between fundamental and translational science, his current research focuses on understanding the molecular switches that cause lymphocyte dysfunction in immunological diseases.

Our recent efforts have led to the generation of high-resolution genome-wide maps of nuclear architecture, chromatin structure and gene expression during the reprogramming of lymphocytes into pluripotent stem cells. Computational integration of these datasets showed that modifications of 3D chromosomal organization often precede transcriptional changes at key loci, pointing towards a general instructive role for 3D chromatin structure in regulating transcription and cell fate. In addition, we generated the first epigenome maps of circulating human innate lymphoid cell (ILC) precursors and group 2 ILCs. These experiments revealed novel putative regulators of human ILC biology and support a pathogenic role for group 2 ILCs in allergic asthma (Figure 1). 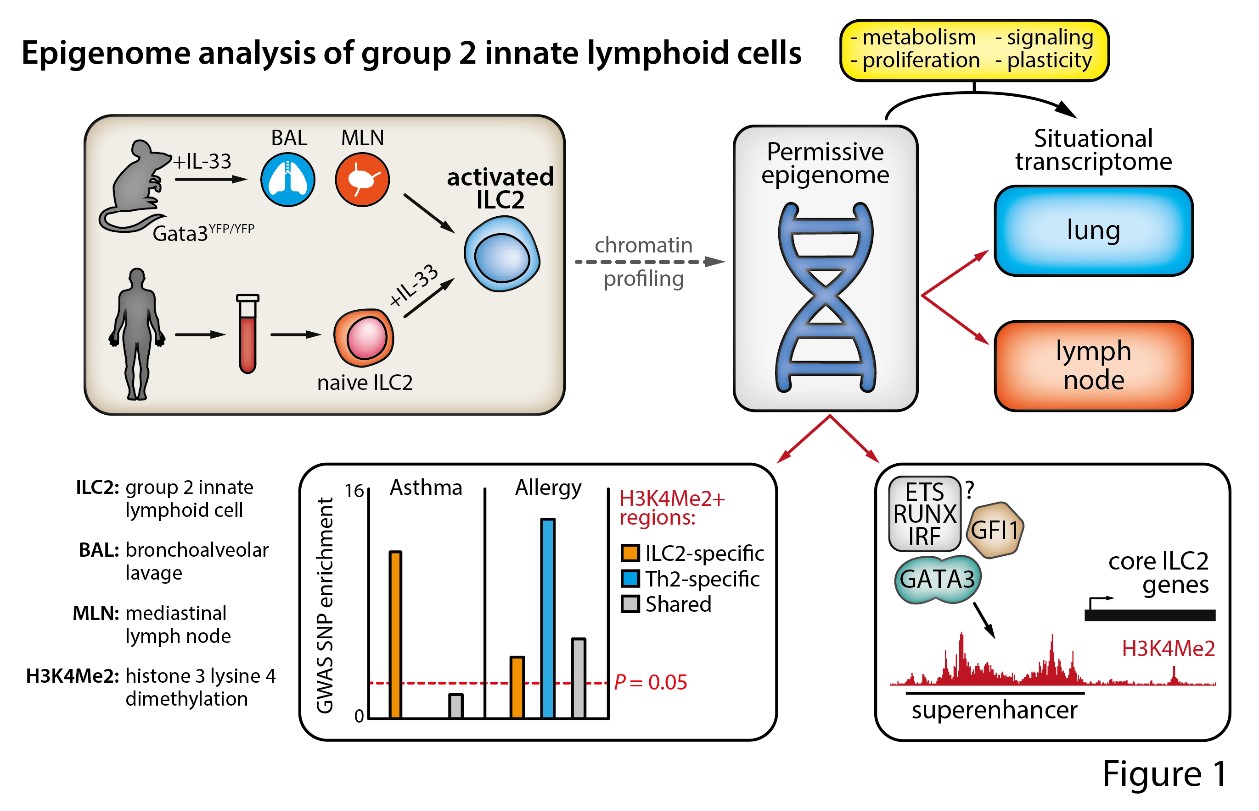