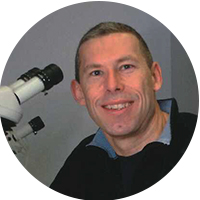 Head of the Department

Peter Verrijzer studied mathematical biology and biochemistry at Utrecht University, the Netherlands. He obtained his PhD (1992) from the same university for his research on POU transcription factors with Peter van der Vliet. During his postdoc in the group of Robert Tjian at UC Berkeley he started to study gene regulation in animal cells. Here, he showed that the TAF subunits of TFIID direct core promoter selectivity of RNA polymerase II transcription. In 1996 he joined the Imperial Cancer Research Fund (now part of the Crick Institute) in London as a group leader, and began his work on the role of chromatin and epigenetics in development and cell proliferation contorl. In 1999 he became full professor of Molecular and Cell Biology at the Leiden University Medical Center. In 2004, he moved to the Erasmus University Medical Center, where he heads the department of biochemistry and the proteomics center. Verrijzer's lab aims to understand the mechanisms of gene regulation that underpin development and disease. They use an integrated approach, combining biochemistry, proteomics, developmental genetics and cell biology. Taking advantage of evolutionary conservation, key regulators are studied both in human cells and in the genetically tractable fruit fly. Peter's work has provided novel insights in the roles of chromatin remodeling factors and Polycomb repressors in gene control and cancer. More recently, his lab found that selective biosynthetic enzymes do double duty as transcriptional regulators, and are enlisted to safeguard against aberrant cell proliferation. The main focus of his present research is the role of chromatin remodelers in human disease, and the coupling between cellular metabolism and epigenetics. Peter is a member of the European Molecular Biology Organization (2007).

We investigate the molecular mechanisms of gene control with a focus on chromatin and its connection to metabolism. In particular, we are interested in the balanced activities of trithorax group activators and the Polycomb repressors. We use an integrated approach, combining biochemistry, proteomics, developmental genetics, advanced imaging and cell biology. Taking advantage of evolutionary conservation, central pathways are studied in human cells and in the genetically tractable fruit fly. We discovered that the biosynthetic enzyme GMP synthase (GMPS) does double duty as a epigenetic regulator, through activation augmentation of ubiquitin-specific protease 7 (USP7). This was the first demonstration that a biosynthetic enzyme binds and activates a deubiquitylating enzyme. Moreover, we found that GMPS is a crucial relay of p53 stabilization by USP7 after genomic stress. We uncovered that inosine monophosphate dehydrogenase (IMPDH), a central enzyme in purine biosynthesis, also functions as a sequence-specific transcription factor. Collectively, these findings suggest a more general, direct involvement of metabolic enzymes in gene control. Our research suggests that selective metabolic enzymes, which fuel cell proliferation, are also part of the molecular pathway that prevents aberrant cell divisions. These dual function metabolic enzymes may provide novel opportunities for therapeutic intervention in cancer and other diseases.

We have a long-standing interest in the biological and biochemical functions of ATP-dependent chromatin remodelers. We uncovered functional diversification among different remodelers, identified multiple subunits of the fly SWI/SNF remodelers, described their transcriptional circuitries, and provided insight in the molecular mechanisms of specificity. Loss of specific remodeler subunits has been implicated in multiple human cancers. We found that SWI/SNF drives Polycomb eviction and epigenetic reprogramming of genes that play key roles in cancer. Collectively, our findings revealed the importance of balanced antagonism between PcG repression and SWI/SNF remodeler action in human cancers, stem cell differentiation and aging.

We study the role of protein (de)ubiquitylation in transcription control. We first implicated the deubiquitylating enzyme USP7 in Polycomb repression. Our identification of dRAF, the first non-canonical PRC1 complex, uncovered the coupling between histone H2A ubiquitylation and H3K36me2 demethylation. These findings revealed coordinate trans-histone regulation by a PcG complex to mediate gene repression. We found that PSC, a classic Polycomb transcriptional repressor, regulates the cell cycle in a transcription-independent manner. Thus, direct regulation of cell cycle progression might be a crucial part of the PcG system's function in development and cancer.

The main focus of our present research is on the coupling between metabolism and transcription in development and disease. In particular, we are interested in selective metabolic enzymes that are recruited to chromatin to regulated gene expression. These double-duty enzymes may provide a direct coupling between metabolic state and gene expression control. Moreover, we aim to connect the main metabolic signaling pathways, including AMPK and mTOR, to transcription control programs. We are particularly interested in the transcriptional consequences of cancer-associated metabolic adaptations.

We have a continuing interest in the role of the ATP-dependent chromatin remodelers in human cancer. We currently study the interplay between chromatin remodelers and the Polycomb system in tumor suppression. More recently, we started to use advanced imaging techniques, combined with genetic analysis, to analyze the dynamics of developmental gene control in living Drosophila.

Finally, we have taken an unbiassed proteomics approach to identify potentially novel targets of ubiquitin-regulated chromatin and transcriptional processes in mammalian cells and in Drosophila. We are using a combination of biochemistry, genetics, imaging and cell-based assays to validate novel candidates with relevance for human disease.