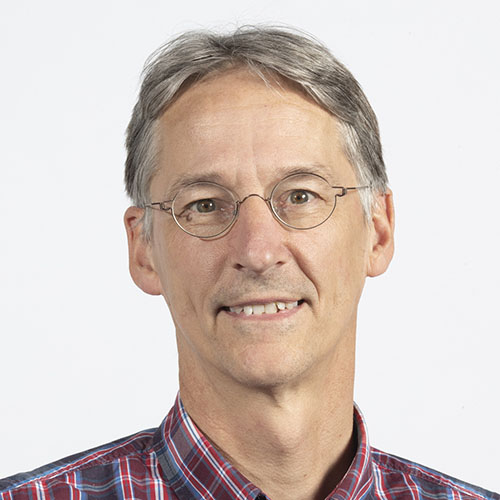 Theo van Walsum graduated in Informatics at the TU Delft in 1990. In 1995 he received his PhD on flow visualization at the Scientific Visualization Group of TU Delft. After one year at  the LKEB (LUMC), where he started working on image processing, he became a Post-doc at the Image Sciences Institute (UMC Utrecht). There he developed his interest in improving image guidance, and worked on several projects where rotational imaging was used for image guidance.

He got a position at the BIGR group at the Erasmus MC in February 2005 where he is heading the “Image Guidance in Interventions and Therapy” theme group. This group focusses on improving image guidance by integrating pre-operative image information in the interventional situation for cardiovascular and abdominal applications. He is also involved in cardiovascular image processing; he co-organized three cardiovascular “Grand Challenges” and organizes the MICCAI workshops on medical imaging and stroke.

Theo van Walsum graduated in Informatics (Computer Science) at the Delft University of Technology in 1990. In 1995 he received his PhD at Scientific Visualization Group of Delft University of Technology. Next, he was worked for a year at the Laboratory of Clinical and Experimental Image Processing (LKEB)on visualization of MRI and MRA data. From 1996 to to 2005, he worked at the Image Sciences Institute at the UMC Utrecht, on simulation and visualization for endovascular treatment of AAA, the image processing software environment, catheter tracking for image guidance and image guidance using 3D Rotational X-Ray imaging. In 2005 he moved to the Biomedical Imaging Group Rotterdam at the Erasmus MC.

See my publications at Google Scholar

Image Guidance in Interventions and Therapy

Image Guidance in Interventions and Therapy