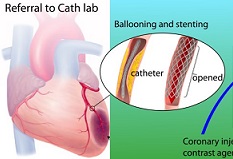 This project focusses on new echography to measure the blood flow inside the heart wall, such that the interventions in the Cath lab can be better monitored.

Yearly many patients with a myocardial infarction (“heart attack”) receive a minimally-invasive intervention (opening the obstructed coronary artery with a balloon on a catheter and placing a stent) followed by pharmaceutical treatment. Yet, even if the artery is re-opened, roughly one-third of these patients do not show full reperfusion of the infarct zone. The mechanism behind such no-reflow is unknown. A direct, accurate measurement of reperfusion would allow quick pharmacological testing during intervention, which enables a patient-specific treatment. There is no method yet available in the Cath lab to accurately quantify the re-perfusion in the infarcted area.

In this project, the researchers will build a 3D-echographic system that can image the myocardial perfusion through the detection of ultrasound contrast agents. These agents are regularly used in the clinic, yet accurate readout needs crucial inventions for fast volumetric echography.

The team consists of several researchers with their own specialism: transducer developments, data processing, imaging systems, and pre-clinical, voluntary, and clinical studies. From scratch, we will develop the concepts and build several prototypes to accurately measure the perfusion.

We will test the system both in lab-settings and in patients, in the Cath lab, to be able to show the benefit of real-time feedback on the myocardial perfusion after opening of the clogged arteries or veins.

This project is funded by a personal NWO-TTW VIDI grant for the PI, Rik Vos, and is further supported by the department of Cardiology, and the ultrasound company Mindray/Zonare.

Any questions or comments?