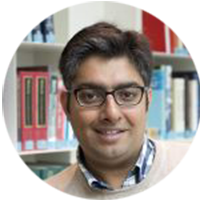 Arnab received his MSc in Medical Biochemistry from Manipal University, India in 2005. After a short stint as a research fellow in India studying DNA repair, he joined the lab of Prof. Massimo Lopes at the Institute of Molecular Cancer Research (IMCR), University of Zurich for his PhD studies. He obtained his PhD in Molecular Biology studying the role of Topoisomerase I (Top1), a common target for therapeutic interventions in cancer which is a DNA replication poison. His findings, using multiple model systems from yeast to human cell culture based models, discovered replication fork reversal as a crucial and evolutionary conserved cellular strategy to prevent chromosome breakage Top1 inhibition and uncovered the molecular events in the maintenance of replication fork stability upon Top1 poisoning.  This finding was in contrast to the common perception that Top1 inhibition resulted in DSB formation through fork collapse. These findings provided a new mechanistic basis to explain the observed synergistic effects of Top1 and PARP inhibitors (PARPi), under clinical trials for combinatorial anticancer treatments (Ray Chaudhuri et al., NSMB, 2012).

As a next career step, Arnab moved to the lab of Dr. Andre Nussenzweig at the National Cancer Institute, NIH, Bethesda as a post doctoral fellow. His work in the Nussenzweig lab using mouse models and a combination of single molecule, cell biological, biochemical technologies focused on understanding on how the modulation of DNA replication pathways results in chemoresistance in breast and ovarian cancers. His work in the fields of DNA replication and repair has linked protection of DNA replication machinery as one of the main mechanisms for contributing to drug resistance in BRCA deficient breast and ovarian cancers. Furthermore, his work could connect transcriptional complexes involved in altering chromatin to replication fork protection thus underscoring the importance of chromatin changes in drug sensitivity in the context of BRCA mutations (Ray Chaudhuri et al. Nature 2016).

Arnab joined the Department of Molecular Genetics at the Erasmus Medical Center in April 2017 and his research lab will be focused on the  structural and molecular understanding of DNA replication stress in tumorigenesis and chemoresistance.

Replication stress in Tumorigenesis and Chemoresistance

Our lab aims to understand the intricate structural and molecular mechanisms that link genome instability resulting from replication stress with tumorigenesis and chemoresistance. We use the genetic tractability of the mouse model organism with a combination of unique structural, biochemical and cell biological approaches to gain deeper insights into the mechanisms that that underlie the stabilization of the DNA replication machinery, thus resulting in genome stability.

DNA replication is an essential, but dangerous process that cells have to undergo for continued proliferation. Disruption of the replication process, results in a failure to maintain the integrity of replicating chromosomes resulting genome instability, which is a driving factor for tumorigenesis. Furthermore, most of the common anti-cancer drugs also interfere with the mechanism of DNA replication, relying on the generic observation that cancer cells are generally deficient for DNA repair pathways and checkpoints and are thus sensitized to DNA damaging agents.

Proteins involved the repair of double stranded breaks (DSB) and DNA crosslinks via the homologous recombination (HR) pathway have also evolved to protect cells from proliferation associated DNA damage by stabilization of the DNA replication forks. These factors protect stalled DNA replication forks from nuclease mediated processing which is genetically separable in their role to repair DSBs. A major focus for the past years have been on mutations in Breast Cancer (BRCA) genes which predisposes individuals to breast, ovarian and prostate cancers which has primarily been linked to defects in DSB repair through HR. Furthermore, DNA repair defects have also been identified in sporadic cancers. This has resulted in efforts to identify unknown mutations in genes which could lead to DNA repair defects. However, there is very little information available on how these proteins affect replication fork stability and if they could act in concert with other known HR factors in maintenance of genome stability to prevent tumorigenesis. Also, it is mechanistically unclear how tumor cells survive the loss or mutations in HR proteins like BRCA2, as DSB repair is thought to be essential for the survival of primary cell types. Therefore, it is important to mechanistically understand the role of DNA repair proteins in the control of replication fork stability and study its link to maintenance of genome integrity.

Our group is focused on unravelling the structural and molecular mechanisms that underlie replication fork stability in maintaining genome integrity and thus playing a role in the prevention of tumorigenesis. Using mouse genetics and combination of unique structural, molecular  and cell biological  technologies like high throughput imaging screens, quantitative proteomics, Electron Microscopy and single molecule DNA fibers, and we plan to identify and characterize factors that are  responsible for replication fork stability and prevention of tumorigenesis.

Evolution of chemoresistant tumors represents a major therapeutic problem in the clinics. Recent work suggests that chromatin remodeling at replication forks could play a crucial role in the stabilization of stalled forks. This fork stabilization could result in chemoresistance in BRCA deficient tumors. However the mechanisms by which chromatin remodeling  could confer chemoresistance remains poorly understood. We are therefore focused on understand the mechanisms by which changes in chromatin structure brought about by remodelers could influence replication fork dynamics resulting in resistance to chemotherapeutic regimens which poison the DNA replication process.