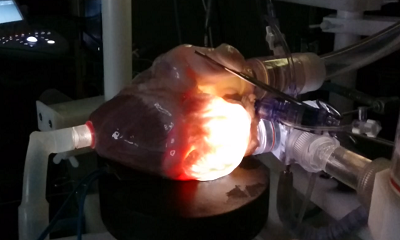 What is the motivation for this research?

Atrial fibrillation (AF) is the most common cardiac arrythmia. Starting from short periods (paroxysmal AF), it frequently develops into chronic AF, which is a debilitating disease. It leads to reduced pump function, frequently progresses into heart failure and is one of the most important causes of stroke. Catheter-based RF ablation is a minimally-invasive therapeutic intervention during which scar tissue is created, interrupting aberrant current paths. It is a procedure that takes hours, guided by X-ray imaging, which does not show the atrial wall itself, nor the effect of ablation. As a result, reconduction occurs in many cases (~40%) due to incomplete lesion formation.

What is the aim?

Using optical spectral contrast, we visualised RF ablation lesions in the left atrium by photoacoustics. Light is delivered from the ablation catheter while imaging is performed using an intracardiac echo probe.

How will you perform this research?

We used photoacoustic imaging, a technique that generates sound with pulsed light, to investigate the spectral response of healthy and ablated myocardium. In these experiments we found that a ratio of two wavelengths can be used to identify and delineate ablation lesions with a diagnostic accuracy of 97%. This imaging technology can be readily applied in an ablation procedure, as demonstrated in ex vivo beating heart experiments.

What is the desirable outcome?

The heart presents a very challenging environment for invasive imaging, because of cardiac motion which affects both the imaged target and the imaging devices. Blood is a major obstacle in visualizing cardiac structures with light. We solved this problem by placing the light source in contact with the cardiac tissue. We designed and built an ablation catheter that encompassed an optical fiber for delivery of the excitation for PA imaging. PA signals can be detected with a conventional intracardiac echo (ICE) catheter that is customarily used for introducing the interventional devices into the left atrium.

Please contact our office if you have any questions or comments.