Erasmus MC is a single organisation with a single identity. All Erasmus MC departments and units share a common name, logo and house style.

Erasmus MC encompasses a full spectrum of clinical services, including those provided by two specialist units operating under the Erasmus MC umbrella: Erasmus MC Sophia Children’s Hospital and Erasmus MC Cancer Institute. Both have unique reputations of their own in the world of university hospitals.

Our mission statement and our vision 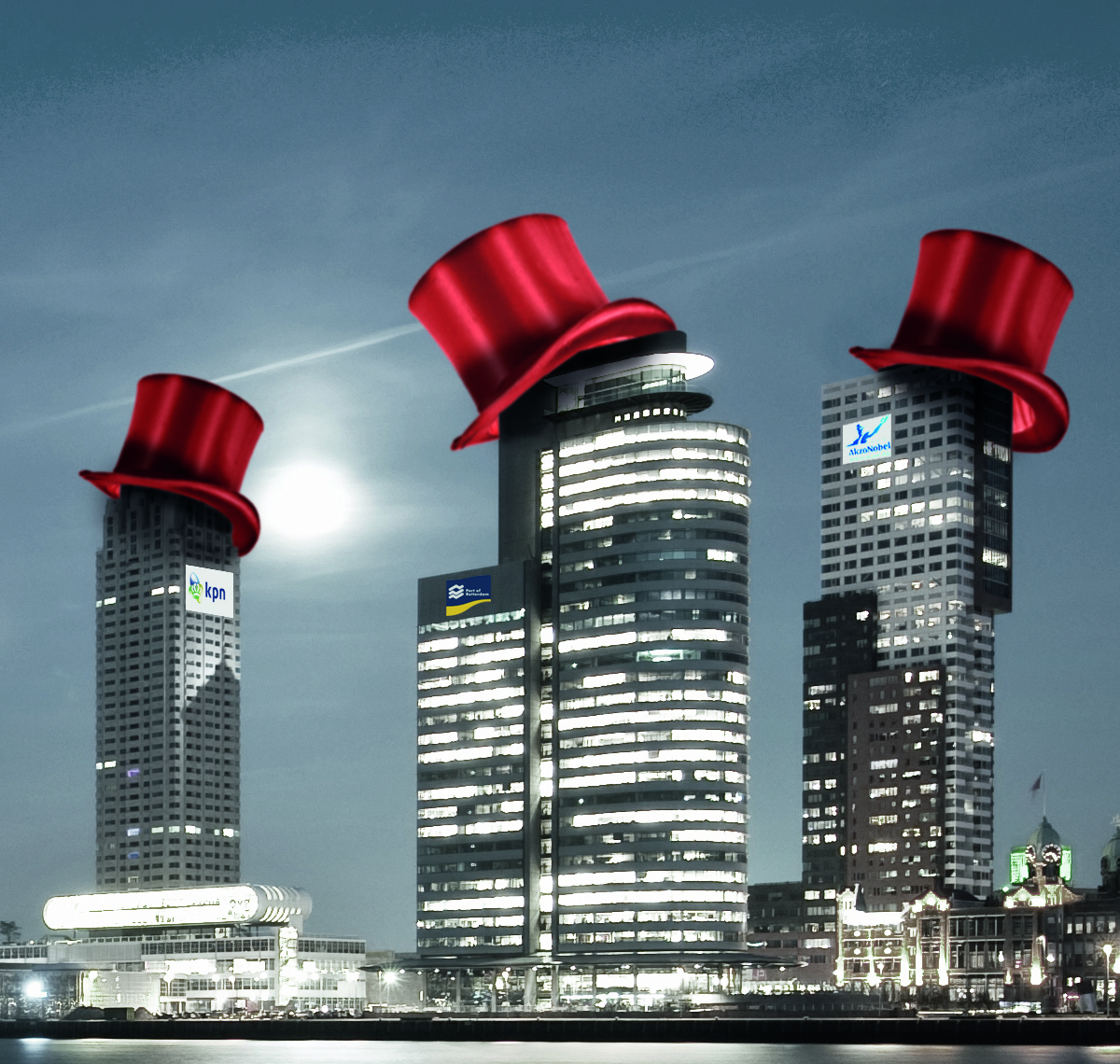 1863: Led by Dr Hendrik Willem De Monchy, seven respected local citizens decide to set up a children’s hospital. The building is located above a furniture store in Hoogstraat, the street now better known as the ‘Koopgoot’ or ‘the shopping gutter’.

1869: Queen Sophia donates 100 guilders and a sewing machine to the children’s hospital. The hospital is named after her in return.

1914: The Rotterdam Radiotherapy Institute is founded. A radiologist from Gouda called Daniel den Hoed is appointed as the institute’s director in 1940. Under his leadership, the institute evolves into an outstanding clinic that will later bear his name.

1940: The Coolsingel Hospital takes four hits during the German bombardment of Rotterdam. The building catches fire almost immediately and most of it is destroyed. Thanks to the presence of a number of facilities elsewhere, a new hospital can be built.

1950: The predecessor of the medical faculty, the Foundation for Higher Clinical Education, is founded. The foundation trains medical graduates from all over the Netherlands.

1961: The Dijkzigt Hospital, on the Land van Hoboken site, opens on 18 September. The hospital is named after the Van Hoboken family residence, a grand house which now houses the Natural History Museum.

1966: The Faculty of Medicine and Health Sciences is founded by Professor Andries Querido on 7 October.

1971: The Dijkzigt Hospital merges with the Sophia Children's Hospital to become the Rotterdam University Hospital.

1982: Erasmus University Rotterdam launches a master’s degree in healthcare policy and management, under the aegis of the Faculty of Medicine and Health Sciences. The degree course is later renamed as Health Sciences, Healthcare Policy & Management.

1993: The oldest children’s hospital in the country moves to the Hoboken district of Rotterdam, where the Dijkzigt Hospital and the Faculty of Medicine are already located. A footbridge connects the two hospitals with the medical faculty.

2016: The 50th anniversary of university hospital care in Rotterdam.

Visit our website (Dutch only) to discover our history and see what we have become today.

Governance is all about sound management, effective supervision and full accountability.

The UMC Governance Code, i.e. the governance code for university medical centres, was adopted on 1 January 2008. Although it is based on the governance code for the whole of the Dutch healthcare industry, it differs from the latter in a number of aspects. These changes were made in order to align it more closely with the specific characteristics of a university medical centre, including higher education, academic research, training and the related care services.

You can download both the UMC Governance Code and the industry-wide governance code from www.nfu.nl (Dutch only).

The Executive Board is made up of Ernst Kuipers (chair), Hans van Leeuwen (deputy chair and dean), Joke Boonstra (member) and Paul Boomkamp (member).

What does the Supervisory Board do?

These are some of the things that the Supervisory Board is required to approve:

How are the members of the Supervisory Board appointed?

The chair and the members of the Supervisory Board are appointed for a four-year term of office. This period may be extended once only for another four years.

Who are the members of the Supervisory Board?

Mr Gijs de Vries was appointed for his first term of office on 1 January 2016. His areas of expertise are administrative and legal affairs, finance and IT. Mr de Vries chairs the Supervisory Board’s Appointments and Remuneration Committee. He also chairs the Supervisory Boards of IKNL and Arbo Unie, and the Executive Board of Stichting Achmea Slachtoffer en Samenleving.

Professor Aart Hendriks was first appointed as a member of the Supervisory Board on 1 December 2014. His appointment was extended for a second term on December 2018. His areas of expertise are legal and administrative affairs. He is a member of the Supervisory Board’s Quality Committee. Professor Hendriks is a Professor of Health Law at Leiden University’s Faculty of Law and at the Leiden University Medical Centre. He is also a legal adviser and health law coordinator at the Royal Dutch Medical Association.

Mr Hans Turkesteen was appointed for his first term on 1 July 2016. He is a financial expert and chairs the Board’s Audit and Compliance Committee.

You can reach the Supervisory Board by phone at (010) 703 3930 or by email at secretariaat.rvt@erasmusmc.nl.

The share capital of our subsidiaries is owned by a parent company called Erasmus MC Holding B.V. View the chart showing the structure of the Erasmus MC group.

If you’re not able to view the organisational chart, but would nonetheless like to read what it says, go to the web page describing our group structure in full.

Erasmus MC has been setting out a five-year strategic plan, named Course, since 2003. Each edition of Course clearly sets out our ambitions in terms of providing patient care, teaching, training, and conducting research. In each of these core tasks we focus on the social impact and valorization of our ideas. In doing so, we take account of developments in our own organization as well as developments in the world around us.

You can read the strategy document here (Dutch only). 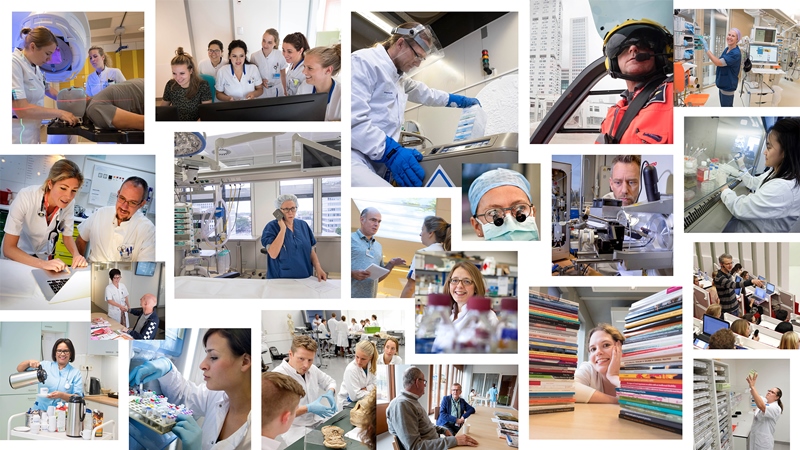 Technology & Dedication are the two guiding principles underlying Strategy23 and are at the core of our goals. The word ‘dedication’ describes the way in which our staff perform their work, with time and consideration for their patients and each other, passion for scientific research and concern for the interests of their students. They do this against a backdrop of rapid changes in technology. Our strategic ambitions embrace both these aspects: people and technology, healthcare and innovation, and teamwork and impact.
Read the strategy document here.

Impact: the crux of Strategy23

We wish to have a social impact by championing a healthy society. This is our social purpose as a university medical center. This is the target towards which we will be working over the next few years. Strategy23 follows three distinct routes towards this target.

Positioning ourselves as a partner

We aspire to being a valued partner in all our collaborative efforts. Trust, interest and respect for each other’s input and expertise are key here. First and foremost we see and treat our patients as valuable partners in all our core activities. We are also an academic powerhouse shaping, leading and facilitating new regional, national and international partnerships and networks, and connecting the Rotterdam region with new developments, both in the Netherlands and further afield. We wish to be a driving force, strengthening and enriching existing partnerships and challenging our partners to seek the unexpected.

We believe it is our social responsibility to take the lead in treating patients effectively (i.e. providing the right form of healthcare at the right time and place), in promoting health, in understanding, predicting and preventing disease through research, and in training the healthcare professionals of the future. These are all things we seek to do in conjunction with our partners.
We need to contribute to political and public debate and to be perceived as an established and reliable scientific authority on healthcare. We also wish to make effective use of scarce public funds and to help create an accessible, affordable and inclusive healthcare system.

Using technology to lead the way in innovation

In the future, major innovations in health and healthcare will emerge at intersections between the biomedical and natural sciences, medicine, engineering and big data. These innovations will influence people’s views on health and disease, in terms of molecules and cells, but also in terms of individuals and populations as a whole. They will affect the way in which we organise our patient care, our scientific research and our teaching. Technology is becoming an increasingly important – and indeed crucial – part of our work. Against this background, we are seeking to become the top technical university medical center in the Netherlands. Operating in a unique setting means that the conditions are ideal for this. Firstly, Rotterdam — with its highly diverse population — is a city with pronounced ambitions in life sciences and health, and whose inhabitants are renowned around the country for their can-do mentality. Secondly, the southwest of the Netherlands is a large and diverse hinterland with some 4.5 million inhabitants, many hospitals, three universities (in Rotterdam, Leiden and Delft), as well as our subsidiary hospital in the province of Zeeland. Add into the mix our links with the European Commission in Brussels and our reputation for top-class research performed with long-term partners all over the world.

Focusing on our staff and internal organisation

The human aspect is the inextricable link between technology and health. Adopting a personal approach means fostering long-term relationships not just with our patients, but also with our staff, students and volunteers. Our aim is to offer the latter a pleasant and safe place in which to work, study and fulfil their ambitions. It also means that we wish to do our very best to help overcome the growing shortage of healthcare professionals. This is our responsibility, not just as a healthcare provider and Rotterdam’s biggest employer, but also as an innovator.

Read more in our online magazine about Strategy23.

The Governing Board of the Staff Council consists of all domain chairs and the chair and deputy chair of the Executive Committee.

The Staff Council is made of department heads and faculty members with permanent contracts of employment. The faculty members include medical specialists and similar professionals, university lecturers and medical researchers.

The Patient Council represents the interests of patients at Erasmus MC. It is one of the advisory bodies to the Executive Board.

In addition to its statutory tasks, the Patient Council also seeks to represent a number of common patient interests. These mainly involve quality aspects of care that have a direct bearing on patients’ sense of well-being and the way in which they experience their stay at the Erasmus MC.

The Patient Council seeks to raise staff awareness of how important it is to take account of patients’ interests and encourages patient involvement in policy-making.

The Patient Council represents the collective interests of patients. If there are complaints, for example, that waiting times are too long or that patients are not properly informed, the Patient Council is entitled to raise the matter with the Executive Board.

Who are the members of the Patient Council?